While Alex’s mates were studying for the HSC, he was learning to breathe again

Alex Richter loves mountain bikes. He loves fixing them, talking about them and riding them, which was what he was doing in the October holidays last year when he fell, landed on his head and broke his neck.

While the then-year 11 student waited for help, his friend called Alex’s mother Karina and held the phone to his mouth. “Mum,” she remembers him saying. “I can’t feel my legs and I’m scared.”

Alex, who turns 18 in October, is a quadriplegic. While his schoolmates studied for the HSC, he was learning to breathe again and coming to terms with the fact he no longer had full use of his hands. 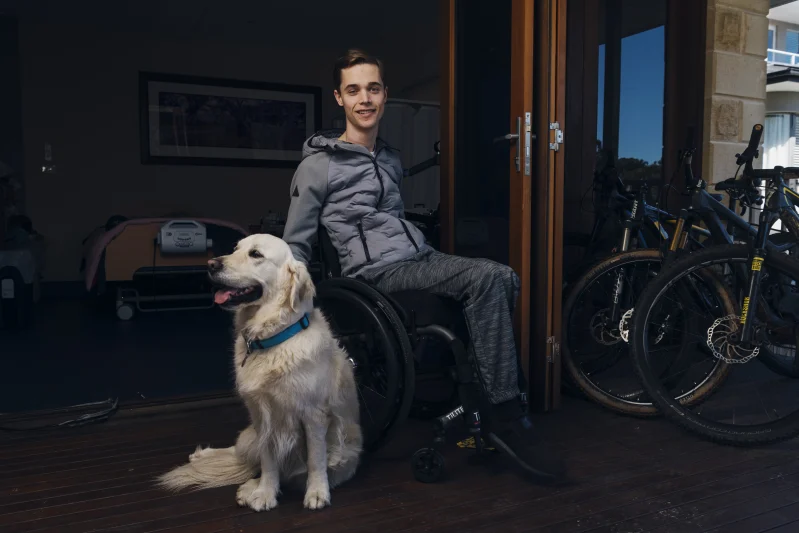 IMAGE: Alex Richter was about to begin year 12 when he fell off his bike and broke his neck. CREDIT: JAMES BRICKWOOD

He returned to school six weeks ago after months of recovery, just in time for his trial HSC exams. His attitude since his accident has been an inspiration to his schoolmates at Knox Grammar in Wahroonga on Sydney’s upper north shore, and a lesson in resilience.

“It was definitely hard, and I’m still trying to figure it out,” Alex said. “It’s been 11 months now, since my injury. Through the whole process I’ve had really good friends and family, who’ve helped keep things in perspective.

Alex did well in the year 11 exams before his accident, so on predictions of a high ATAR, Macquarie University made him an unconditional early offer for a degree in health sciences. “It’s been a huge weight off,” he said.

Despite missing months of school, Alex sat his trial exams, and will also sit the HSC with rest breaks and a scribe to help him write.

He is also figuring out how he can get back on a bike. “I tried a hand cycle, which is pretty cool,” he said. “I also went out to the wheelchair rugby and had a go there. I was just practising, pushing the wheelchair.

“It was cool to go and watch them all, and to speak to people in similar situations. I could see what they can do. They are all driving their own cars, they have jobs, they participate in sport.”

Mrs Richter said Alex’s family and friends had rallied around him, even though most, his siblings included, were not allowed to visit him in hospital due to COVID-19.

“He has been so positive, the whole way through. He’s never looked back. He’s never questioned any negative stuff,” she said. “He’s been brilliant, and my other two kids have been my rocks as well.

“We’re quite practical people. We focus on solving a problem rather than whingeing. There’s been a few things to whinge about.”

Alex’s friends have set up a fundraising project, Ride With Richter, to raise money for equipment he will need, such as a converted car, an electric bike – which will give him day-to-day independence – and modifications to his house.